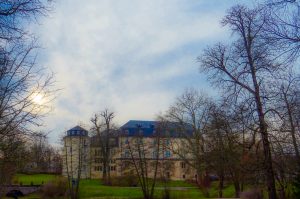 Johann Wolfgang von Goethe is regarded as the most important German poet, outstanding personality of world literature and is also regarded abroad as a representative of the spiritual Germany.

He has also worked as a theatre director, art theorist, chief librarian (Anna Amalia Library, see photo), natural scientist, politician and administrator. He was also a businessman, husband and father and indulged his passion for collecting countless minerals, paintings, books, coins, sculptures and ceramics. With so many different commitments and interests, he needed good time management. Where else was there room for the muse, for creative and scientific exchange with scholars?

The source of his power and inspiration 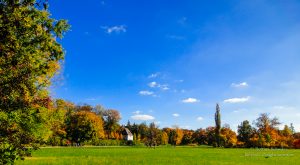 Nature had a major influence on Goethe’s poetic work, correspondence and personal conversations. Many of his works were written on green paths. He found inspiration in the fields and forests, and he was also a leading designer of them. The Park an der Ilm (photo) was laid out according to his ideas, in the style of an English landscape garden. In the middle of this park is his garden house and garden. Here he mixed useful and ornamental plants, again according to the English model, and created inviting niches and seats to linger in. The mallow, Goethe’s favourite flower, receives special attention. Later, when he moved into his new house on the Frauenplan, Goethe designed his house garden here as well.
He acquired his knowledge of garden design by studying the writings of Hirschfeld, the then most important German garden theorist. The results can still be admired to this day in Weimar.

The Bible has accompanied Goethe since childhood and he has been dealing with it all his life in search of a higher truth. However, he was disturbed by the depiction of the instruments of torture at the crucifixion and the death of Jesus. He did not want to see the crucified one, he wanted to see the resurrected one depicted. In a conversation with Eckermann on December 31, 1823, he also complained: “People maltreat the divine name as if the incomprehensible, unimaginable supreme being were not much more than their peers. Otherwise they would not say: the Lord God, the dear God, the good God. He becomes a phrase, a mere name for them, especially the clergymen who lead him daily in their mouths, and they think nothing at all. But if they were pervaded by his greatness, they would fall silent and not call him before worship.” Goethe preferred to use descriptions like “the infinite,” “the monstrous,” “the eternally active,” “the world spirit,” “the world soul,” “the unknown higher being,” “the ruling powers,” “the eternal one.
In “Poetry and Truth” Goethe wrote: “But may one allow me to worship him who was so great in the wealth of his creation, to make one more after thousandfold plants, in which all others contain, and after thousandfold animals one being, which contains them all: man.

From the beginning he has had a special inclination towards nature piety and he identifies God with his creation of nature and he sees in it above all beauty and goodness. For Goethe, nature and the divine were identical and natural science was for him a partial knowledge of God. So he saw himself as a pantheist* and less as a Christian, and with this view of God and nature he stood crosswise to all the basic views of the century.
Nevertheless, or perhaps because of his deeper understanding of the mythical forces of nature, Goethe left behind so many works that we still enjoy. 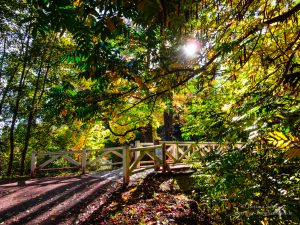 “Found” is one of my favourite poems by Johann Wolfgang von Goethe. He wrote it in 1813 on the occasion of the 25th anniversary of his first encounter with his wife Christiane von Goethe, née Vulpius. The natural bridge in the Park an der Ilm (see photo) is the place of this first encounter. Later, the poet and “the little flower” met more often in the garden house.

I walked in the woods
That’s it for me,
And nothing to look for,
That was my point.

In the shadow I saw
A little flower is standing,
Like stars shining,
Like little eyes beautiful.

I wanted to break it,
That’s a fine word:
Shall I wilt to
Broken?

I dug it with all
The little spice.
I carried it to the garden
By the pretty house.

And replant it
In the quiet place;
Now it always branches off
And blossoms away.

*Pantheism refers to the view that God is one with the cosmos and nature. There is no personified God here. The divine is seen in the structure of the universe, it exists in all things and animates all things of the world or is identical with the world.