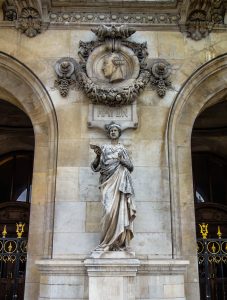 Joseph Haydn, Kapellmeister at various princely courts, pioneer of Viennese classical music, teacher of Wolfgang Amadeus Mozart and Ludwig van Beethoven and many others, was the most popular European composer of his time. Among his countless unparalleled works is the German national anthem, which he composed in 1797. Growing up in modest circumstances, he achieved world fame through his talent and diligence. (Photo: Paris Opera)

“God the Almighty (to whom I alone owe such immeasurable grace) gave me so much lightness, especially in music, by singing some masses to the choir in my 6th year.”

Joseph Haydn was highly esteemed both as a musician and as a human being and was known for his distinctive sense of humour and his love of tricks. This can also be heard in his music. His compositions often convey the feeling of a peaceful and sunny Sunday afternoon.

“Since God has given me a cheerful heart, he will forgive me if I serve him happily.”

Haydn was very religious, and religion and beauty were almost one for him. He was convinced that all talents come from above and that all human destinies are under the guiding hand of God and that God is the rewarder of good and evil. When he was stuck in a composition or had a writer’s block, he often picked up his rosary and prayed a few Hail Marys. He found this habit helpful. When a composition was finished, he wrote “Laus Deo” (Praise be to God) or a similar phrase at the end of the manuscript.

“I was also never so pious as during the time I was working on creation; every day I fell on my knees and asked God to give me strength to do this work happily.”

This grandiose work deals with the creation of the world in three parts. The first part is dedicated to the earth, the plants and the firmament. In the second part the creatures are added. The third part deals with the lives of the first human beings Adam and Eve and culminates in the final great choirs of praise and thanks. “Creation” is one of my favourite works by Haydn and touches me especially.

At that time, a dubious doctrine, the skull doctrine, was haunting half of Europe. The German physician and anatomist Franz Joseph Gall believed that the shape of the skull and the shape of the bones surrounding the brain could be used to infer the nature of man. This teaching found fanatical followers and so the gravedigger of the cemetery was bribed, Haydn’s body excavated, the head chopped off and diligently examined. No explanation was found for Joseph Haydn’s ingenuity, which enabled him to compose countless masterpieces. Of course, this desecration of the grave did not go undiscovered. But it was to take another 145 years for the head and body to come together. May he now rest in peace.