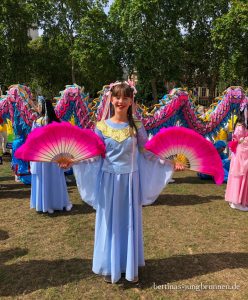 Falun Dafa is a form of Qigong and is based on the values Zhen, Shan, Ren – Truthfulness, Compassion, and Forbearance and serves the physical and mental self-improvement.

On this big parade through the centre of London the brutal persecution of Falun Dafa practitioners in China by the Communist Party was made known. During the parade, for example, I wore a sign calling for an end to the persecution. At the end of the parade, a meeting with several speakers took place in front of Westminster Palace. Ethan Gutmann, an award-winning China analyst, human rights defender, writer and investigative journalist, was present. For many years he has been fighting against organ theft and cold-blooded persecution. The Uighur refugee and former surgeon Dr. Enver Tohti described in a very moving way how he himself carried out illegal organ abstractions from living people under duress. 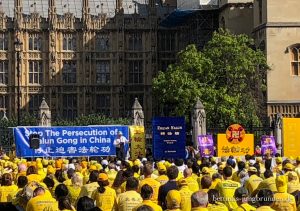 Since I have been practicing Falun Dafa for several years, it goes without saying that I take part in such events and draw attention to this cruel crime. 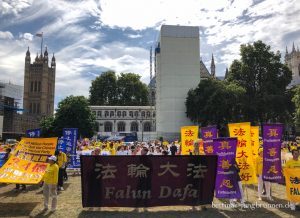 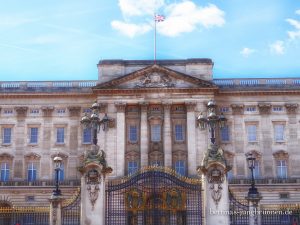 This was my first visit to London and of course my husband and I took the opportunity to take a closer look at the city. My impressions of Buckingham Palace, Kensington Palace, Albert Memorial, Hyde Park, Tower Bridge, Westminster Abbey, London Eye,…

Further information on this activity and on the serious human rights crimes in China can be found at www.faluninfo.eu .