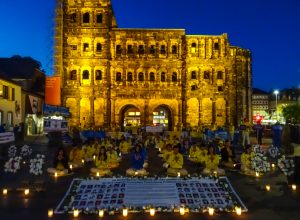 Yellow lights of hope; we heard this description again and again from the passers-by in Trier. Because about 120 Falun Dafa practitioners dressed in yellow T-shirts were present at different locations in the city centre to tell the people about Falun Dafa and its persecution in China by the communist party.

The reason for our presence was the 200th birthday of Karl Marx, also called the forefather of communism. On this occasion, representatives of the Chinese twin city Xiamen presented a controversial gift to the people of Trier. A 5.50 meter tall bronze Marx statue. It was unveiled during a ceremony and is now on Simeonstiftplatz. This event attracted many visitors on the weekend of 04.05.- 06.05.2018 and put the birthplace of Karl Marx in a state of emergency.This was a good opportunity to tell these people, including many Chinese tourists, the truth about Falun Dafa, the truth about the persecution by the KPC and to collect signatures for the petition of DAFOH (Doctors Against Forced Organ Removal). 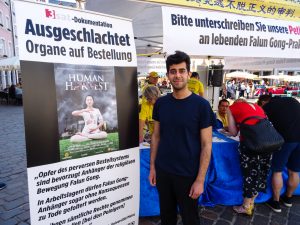 Bacher Said from Trier has never heard of Falun Dafa and their persecution. He says: “It is disgusting and inhuman what is happening in China”. 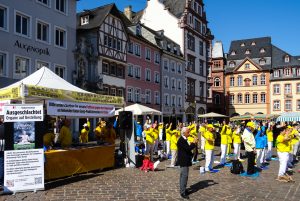 Information stand on the main market square. Here the five Falun Dafa exercises were demonstrated and speakers such as Hubert Körper from the International Society for Human Rights (IGFM) informed about the current situation in China. 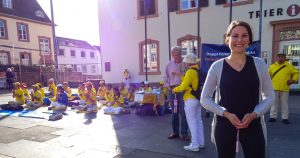 Verena Schwarz human rights and the environment are important. She is studying political science and sociology in Trier in order to be able to stand up even better for these values and to leave a healthy living space for the next generation. Therefore it was natural for her to sign the petition. Verena wishes us all the best and much success in our work for the good and said goodbye to me with the following proverb: “If many little people in many small places do many small things, you can change the face of the world”. 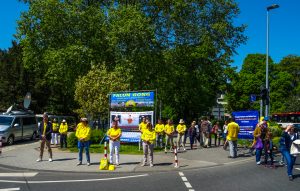 Opposite the Marx statue we showed the exercises and distributed information material to the passers-by. 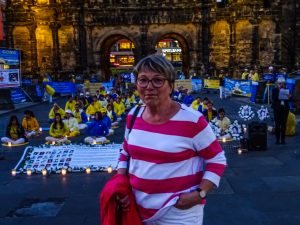 I met Edeltrud Holbach at the candlelight vigil in front of Porta Nigra. At that time, 50 names were read by Chinese Falun Dafa practitioners who died of various cruel torture methods in China. Edeltrud is shocked and glad that we are here today and that she has learned of this persecution. At the same time, they became interested in the exercises and teachings of Falun Dafa. That is why she immediately contacted the Trier Practice Group.Thanks to the kindness and openness of so many people, this weekend alone we were able to collect almost 4000 signatures for the petition to the UN High Commissioner’s Office.